Some twenty years ago when a nagging football injury wasn’t being resolved by more traditional medical approaches, Doc Healy became interested in and resorted to chiropractic care to get much-needed relief. His interest is now shared by more than 15 million Americans who every year turn to chiropractic care for safe, natural and effective relief from back pain, neck pain, headaches, extremity pain, poor overall health, low energy levels and much more. 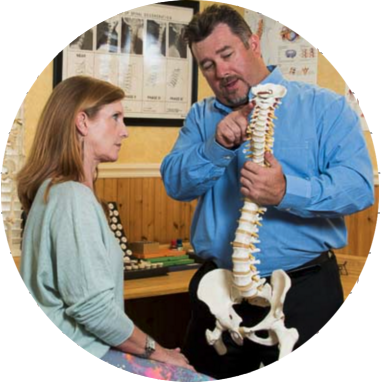 Thank you for your interest in the Chiropractic practice here at KC Chiropractic and Wellness. The word Chiropractic comes from the Greek, meaning done by hand; the practice has been around since the times of Aristotle. Grounded in the principle that the body can heal itself when the skeletal system is correctly aligned and the nervous system is functioning properly, a chiropractor uses his or her hands (or an adjusting tool) to manipulate vertebrae to overcome misalignments, called subluxations, which disrupt proper nerve transmission resulting in body pain and other conditions.

The first documented case of chiropractic treatment yielding results was in 1895 in Davenport, Iowa when D.D. Palmer performed an adjustment on a deaf janitor named Harvey Lillard. Lillard, who said he lost his hearing years earlier when he felt something pop in his back, had reportedly given up on a cure, saying “I was deaf 17 years and I expected to always remain so, for I had doctored a great deal without any benefit.”  D.D. Palmer suspected some impingement to nerves that serviced the inner ear and made the first chiropractic adjustment to Lillard’s spine. Days later, Lillard reported that his hearing was completely restored.

This irritation can result from inflammatory biochemicals released during injury, from direct mechanical pressure or, most commonly, from misalignment of spinal bones which chiropractors refer to as subluxation. Subluxation is derived from the Latin terms Sub ("less than") and Luxate ("to be dislocated"). Whatever the cause of the irritation, the functioning of the nervous system is negatively impacted as is the functioning of the cells, tissues and organs which the affected nerve(s) control. The resulting ailment is dependent upon the cells, tissues and organs affected as well as the extent of nervous system compromise.

Because the body's innate recuperative powers are affected by and integrated through the nervous system, correcting spinal abnormalities which irritate the nervous system can lead to favorable results in patients suffering from various, seemingly non-spinal health conditions. Therefore, diagnosing and addressing the cause of these negative impacts is at the core of a chiropractic treatment.