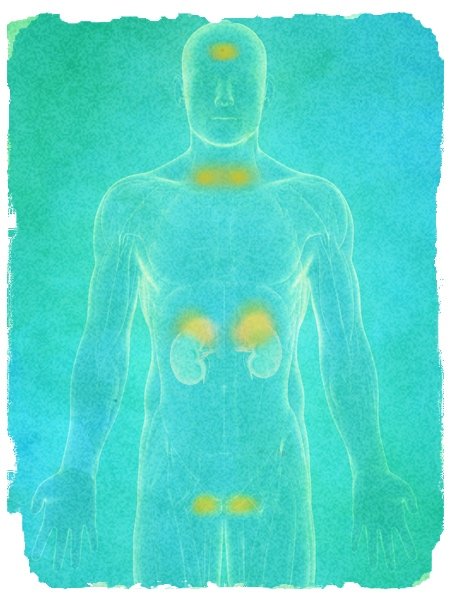 Background:  Often found in individuals with overly-stressed physical or emotional work or lifestyles, this syndrome is said to be the result of the adrenal glands not producing sufficient hormones, chiefly cortisol, resulting in a wide variety of symptoms including, prominently, fatigue. It is a hormone imbalance that creates a complex myriad of symptoms often not associated as being part of a larger problem but often treated for the individual symptoms that become present.

Signs or Symptoms:  There are three stages of Adrenal Fatigue Syndrome:

Early stage: You wouldn’t know it.  You feel great however are starting to use up your reserves.

Mid stage:  Prioritizing of functions based upon the patient’s life leading to fatigue, mood swings, anxiety, lethargy, general aches and pains, insomnia and weight gain. This leads to addictions from driving those systems with cravings of stimulants, caffeine, nicotine, salt, sugar and carbohydrates.  Other glands must now produce more or less hormones to counter the situation based upon need and available resources from diet.

Causes:  The American lifestyle, poor diet and failure to recognize the condition.

Standard treatment:  There is no standard treatment as the medical community, other than congenital Addison’s disease or Cushing syndrome, does not recognize adrenal fatigue syndrome.

Applied Kinesiology Approach:  In one way or another, this ailment makes up the bulk of my practice. While patients don’t come in stating they have adrenal fatigue, they do have many of the above symptoms. It often can present as long term moderate to severe pain that in the past has been helped temporarily with a cortisone shot. As cortisol is the main hormone to be produced by the adrenals in response to stress, the advancement of the condition leads to less precursors being available for your body’s own cortisone. Likewise for the production of corticosteroids like DHEA, Testosterone (that can lead to andropause), and estrogen.  There are less precursors for glucocorticoids-to balance blood sugar, and mineral corticoids- which balance fluids through minerals that influence blood pressure or are the foundation to ligament repair.  Treatment then consists of addressing the many imbalances in a priority that is specific to that individual. This can be difficult and time consuming as this syndrome has probably been developing over many years. But with patience and the proper outline of goals many symptoms of bigger problems to come will be alleviated.